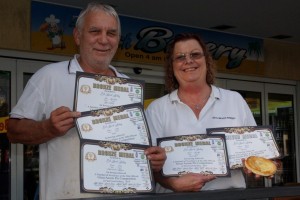 Rod and Sharon Parker from Ed’s Beach Bakery show off their awards for excellent pies!

Rainbow Beach is still the home of award-winning pies – thanks to the current longest serving baker in town, Rod Parker.

Rod has been at the helm of Ed’s Beach Bakery in the Shell Service Station Complex for over nine years now!

Bakers from all over Australia compete for one of the most sought after awards in their industry, The Official Great Aussie Pie Competition.

“We don’t always enter because it is in our busy holiday period,” said Rod. “We send them down frozen, they heat them up…”

And after four days of tasting by an elite team of 16 judges, Ed’s Beach Bakery came up trumps!

Their “Caulioccoli” took out a Silver Medal in the Gourmet-Vegetarian section. You guessed it – a pie with cauliflower and broccoli in a white sauce!

They also brought in four Bronze Medals for Mince and Chunky Beef, Seafood, Chicken, Garlic and Mushroom and the delicious, Corned Beef pies.

The proof is in their popularity, as the bakery is always busy. Sharon says, “Rod starts at 7pm in the holidays and I come down at 1pm and start slicing, so there is something on the shelves when we open at 4am.”

She says it was a very successful holiday season – particularly in the second week.

They are looking forward to a busy festive period ahead – no doubt they will be selling even more Caulioccolis!