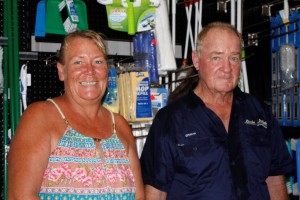 Rainbow Beach is a far cry from the NSW town of Coonabarabran, the astronomy capital of Australia – but Steven and Fiona Border now call it home.

“I’d never been to Rainbow Beach but I fell in love with the place,” Fiona continued. “We’ve been coming here for a few years for holidays.”

Each time they holidayed, they dropped into Rainbow Cooloola Wholesalers in the industrial estate for supplies.

But then there was an about turn.

Each time they holidayed, they dropped into Rainbow Cooloola Wholesalers in the industrial estate for supplies.

“I saw Shane down the street and he told me the wholesalers was on the market. We knew we wanted to go buy something – and decided, ‘They best go and see him!’ ”

So here they are – from farming “sheep, cattle and a bit of cropping” to “5,500 things in wholesale!”

Fiona said, “I do what Shane did: the invoicing, taking orders and going around and seeing people.”

“I’m the storeman/delivery person,” Steven joked. “Some aspects are the same. We’ve still got the books and still got stock but it doesn’t have four legs!”

Their son, George, (15) worked in their warehouse when he was on holidays from boarding school in Sydney.

Daughter, Eliza, (12) attends James Nash High School, has made some close friends and is enjoying the seachange.

Steven is pleased with the move. “It is a very friendly town. I call it a rural community on the coast, and at least it rains here!”

So pop in and say hello – you might be surprised by all the items stocked; you can buy in bulk or even pick up your pots and pans. It may just save you a trip to town.