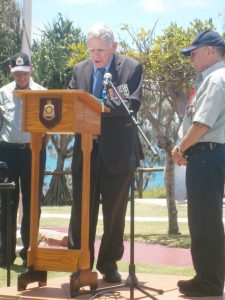 Bruce Dorman will be sadly missed by so many. Rest in Peace Bruce.

On August 30, as Bruce was laid to rest, the Australian Flag was flown at half-mast at the Rainbow Beach Cenotaph in honour and recognition of the service given to his country as a Returned from Active Service Veteran (Vietnam).

In February 1967 Bruce was conscripted into the Australian Army as part of the National Service Scheme 1964 to 1972, and after recruit training was assigned to the Royal Australian Army Infantry Corps.

In January the following year he commenced a tour of duty in Vietnam firstly with 1 Australian Reinforcement Unit. He was then posted to the 7th and then to the 1st Battalion Royal Australian Regiment, which was subsequently engaged in the Battle of Fire Support Base Coral, one of the major battles of the war.

Bruce later suffered physical injuries in the course of his duty there and was returned to Australia for further treatment and convalescence. He was discharged in February 1969 with the rank of Lance Corporal, his conscription responsibility completed.

Rev Bruce was a well-known identity in this community and beyond. Apart from his membership of the Rainbow Beach RSL Sub Branch, he had been actively engaged in other organisations including Legacy, the Vietnam Veterans Association and the Endeavour Foundation, in which he held prominent positions.

In 1999 he was ordained as a Priest and served in the Parish of Gympie as Honorary Assistant Curate until 2018. He was also actively engaged as a Queensland Police Chaplain and Senior Chaplain in an association that lasted over 19 years.

Rev Bruce officiated at the RSL commemorative events, ANZAC Day, Vietnam Veterans Day and Remembrance Day at the Rainbow Beach Cenotaph over the past 17 years.

He will be sadly missed by so many.