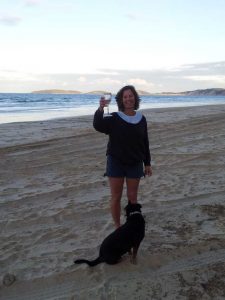 Bronnie was born on the third of February 1959, the same day that the rest of the world lost Buddy Holly, Richie Valens and the Big Bopper, and seemed to have inherited a bit of Rock and Roll in her DNA.

Salt water also ran through her veins, and sand sat comfortably between her toes. As a teenager growing up in Ashgrove, she yearned for any opportunity to head off the Straddie or the Sunny Coast, and of course Double Island Point.

Bronnie cut her teeth on motorbikes riding her dad’s Jawa around the roads on a “new estate” in Rainbow in the 70s, and walked the family corgi to Double Island one day and had to carry him back.

Bronnie followed her wanderlust working on trawlers in the gulf, sailing across both the Pacific and Indian Oceans, living in Cape Town and cutting the hair of a number of distinguished SA politicians of the day, then working as a crew on charter boats in the early days of the Airlie Beach tourist boom. 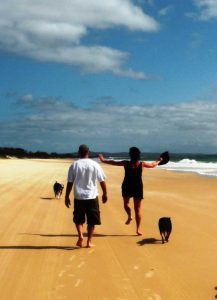 She moved to Rainbow Beach six years ago, after living in Tewantin, perfecting the challenging job of raising her daughter Gracie into a beautiful independent woman, with the same amount of wanderlust liberally sprinkled.

Bronnie absolutely adored Rainbow Beach and carefully but indelibly wove her personality into the fabric of the town.

She will be missed.