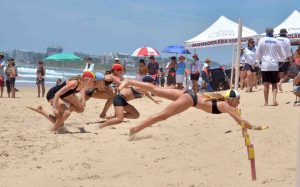 A Rainbow Beach Nipper, Sienna Arthur, won gold for the Under 12 Female Flags at the Queensland State Youth Championships.

Held at North Kirra last month, it was the first State Title for their age group, after Covid ruled out the 2020 event.

Her father, Dave, and step mum, Suzie, were unable to attend due to recent illness, but she had Grandfather Paul and ex Rainbow Beach champion Simon Pascoe helping out.

Simon was the last Rainbow Beach Nipper to win a Queensland title in 1992. Dave and Simon competed together in the ‘90s coming first and second respectively at the Australian Titles in 1994.

Dave said, “I can’t thank Simon enough for this and it shows that the bonds forged in Rainbow Beach Club live on forever. It was special to see the current Queensland champ and the last Queensland champ working together.”

Dave won many Queensland and Australian competitions at men’s level through to 2002. Sienna is a ‘chip off the old block’, who has focused her training on technique and acceleration.

A natural athlete, Sienna wins include the Rugby League Broncos Challenge for RBSS and a silver medal for Tin Can Bay School in the volleyball state titles.

A Wide Bay soccer representative for State, she has just been selected in the 15 years Wide Bay Soccer Team (as a 12-year-old!) and with her sister Keira, trains for volleyball with the Queensland Academy of Sport.

Out of 105 starting athletes, Sienna braved the heat and soft sand for nearly three hours. The commentators announced: “She was dominant throughout. She got up very quickly and got in front from the start.”

After the win, Sienna told the interviewers: “It was amazing, nerve wracking. Dad’s in hospital, I had to do this for my Dad.”

The family thank Rainbow Beach Surf Club and volunteers with a special shout out to age managers, Kirsty and Marty.

As the commentators said, it was good to see our distinctive Rainbow cap in there! Sienna, you did your club and your family proud. Congratulations!