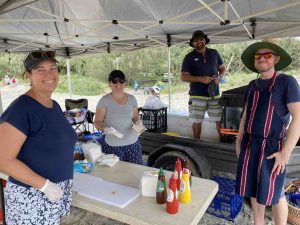 Rainbow Beach P&C has hit the ground running with an eventful start to the year, Chappy Ronnie’s fantastic Sandcastle Competition, and more to come!

“We are lucky to have a strong team,” said President Jed Elmer. “As well as record numbers of members signed up to the P&C this year – thanks to all!”

“The Big Summer Blowout resulted in a whopping $1,600 being raised! Much gratitude to Kroppy and Marnie, and to the few dedicated volunteers who cleaned up and recycled many cans/bottles.”

Variety Jet Trekkers came to school with a large donation and a bonus drone – the lunch by Martine Lokan, the P&C team and volunteers was outstanding.

Monies raised have contributed to the school song Reach for a Rainbow and Barambah camp.

“We are looking forward to creating a rock garden at school, where all students can leave their mark. We will also invest in revamping the student toilets with positive artwork and affirmations.

“Event planning is still in progress, but we are keen on bringing back an all new Trivia Night in September!“

For more upcoming P&C news and events, follow them on Facebook. There is now a donation button if you wish to contribute!