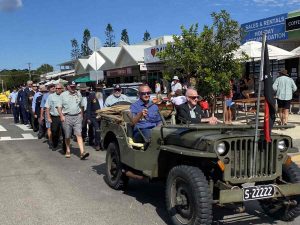 Photos from last year’s Anzac Day service and march. Join us on 25 April to honour our Service Men and Women.

Anzac Day is a National Day of Remembrance.

In 1916 the 25th of April was officially named Anzac Day.

To enable the Community to attend and pay their respects and honour the Service and Sacrifices of all Service Men and Women and their families, the Rainbow Beach RSL Sub-Branch will be conducting the following Ceremonies:

0945hrs – Form up for the Street March on the Centre Block followed by the Citizens Commemoration of Anzac Day.

N.B.  No TCB Citizens’ Commemoration Or Morning Tea Able To Be Held