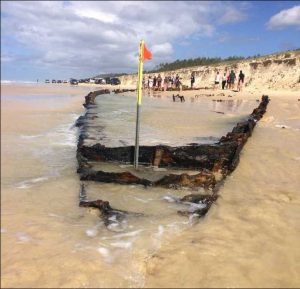 Early last month, remnants of the Cherry Venture were seen on Teewah Beach, now safely buried back under the sand

Last month, rusty remnants of the shipwrecked Cherry Venture began to appear on Teewah Beach, not far from the Leisha track.

Big seas and strong winds caused erosion, revealing a large amount of the wreckage, believed to be the lower section of the hull.

This is not the first time the hull has been exposed, in 2013 Cyclone Oswald and local storms caused severe erosion at the site which removed the layer of sand above the remains of the hull.

Now buried back under the sand, four-wheel drivers are still warned to SLOW DOWN and take care around the wreckage.

History of the Cherry Venture

The Cherry Venture was a cargo ship on route from Auckland to Brisbane when it ran aground on July 6, 1973.

The ship was empty when a severe storm hit, meaning the boat sat high in the water. The strong swell, with recorded wave heights of up to 12 metres, combined with a high tide, pushed the Cherry Venture up onto the sand where she could not be re-floated, despite many attempts. Thankfully, all 24 crew members, plus two monkeys, survived.

For many years, the wreck was a tourist attraction.

The propeller was removed and restored in 1985 and is now proudly mounted as a monument in Rainbow Beach.

In 2006, the wreck was deemed a safety hazard due to deterioration and exposed asbestos in the engine room. In 2007, work began on her removal.

After demolition, the Queensland Government ordered the site be buried for the safety of visitors.

Every few years, big seas, high tides and strong winds expose segments of the hull, causing a safety hazard –  and a reminder of our past.