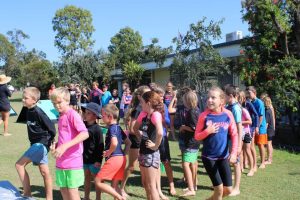 I can’t remember a term going so quickly. I put it down to the business of our day-to-day school life. I am really looking forward to our Behaviour Rewards Day this Thursday. To be totally honest, the behaviour of the students at Rainbow Beach State School has been great for the first three terms of the year.

To celebrate our students’ achievement, the school subsidised the Holt Bolt, which is an inflatable obstacle course. Teachers were also allowed to participate, but after doing my back throwing boomerangs in the NAIDOC celebration, there was a 30-minute warm up and stretching routine before the attempt!

The handball competition was a huge success. I saw so many emotions on display; excitement, nervousness, sadness, frustration and delight. It was great to see students getting involved, competing and most importantly supporting their peers.

The support of various businesses within the community (Rainbow Beach Helicopters, Epic Ocean Adventures, Crème de la Crème, Gympie Sportspower, Rainbow Learn to Surf, 7th Wave and our P&C) was amazing and we thank them for their continued support.

Mr Mileson said over one hundred games were played during the championships. The four divisions were all hotly contested. Those who entered were eligible to be part of the many raffles held during the week of handball battles. He thanked all the students who participated and gave it their best shot!

Lastly, I would like to thank Mr Mileson for organising this annual event and making it important for the students.

We hosted the Bush to Beach kids – a great opportunity for our students to show their support for these children, who are from some of the most drought-stricken parts of Australia.

I thank you for your continued support and hope you have a safe and enjoyable holiday.

First, second and third placings were awarded to: