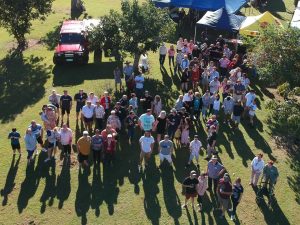 Reibel Family at the reunion

On Saturday July 13, 2019 the Reibel Family, a well known and respected local family, held a reunion. This special event was a celebration of the centenary of the wedding of Joe and Nancy Reibel who were married on July 13, 1919 in London, England.

Descendants of Joe and Nancy gathered at Olive Reibel’s property at Wallu for a family gathering to celebrate 100 years to the day of their marriage.

Graham Reibel is the last remaining child of Joe and Nancy (he is also the youngest of their children). They had eight children (two daughters, Rita and Joan sadly passed within six days of each other from diphtheria in 1936).

Graham cut the cake which was made and iced by Jenny Tritton and featured the Australian and UK connection.

Joseph Andrew Reibel is the son of Joseph and Emily Reibel, born in 1894 in Macksville, New South Wales. Joseph enlisted into the Australian Imperial Forces on May 4, 1916, and served in the 1st Australian Pioneer Battalion.

The following extract is the recommendation made by Lieutenant Corporal’s for Joseph’s devotion to duty: 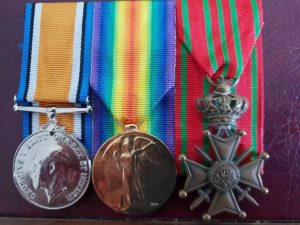 “For conspicuous gallantry and devotion to duty whilst engaged in firing the defences at STRIZSELE during the month of May 1918 where he conducted parties nightly to the forward trench system, displaying great coolness under shell and machine gun fire.
He also showed honourable courage and determination when in charge of his section during the operations at LIHONS and PROYART in August that where they were engaged in digging strong points and forming tracks under constant enemy fire.”

Annie Jane Amelia Smith, known as Nancy, was born in 1898 in Lambeth, Surrey, England. She was the third child and only daughter of Annie Georgina Smith and Alfred Alexander Smith. Nancy’s father passed when she was a child, hence her eldest brother, Sergeant Thomas Alfred Smith, gave her away at her wedding.

Joseph and Nancy met when Joseph was deployed overseas during the war, and they married on July 13, 1919, in London, England.

Joe’s father had come out from Germany in the late 1800s and settled in the Nambucca Valley, NSW. Joe enlisted from there and settled back in the area with his bride, Nancy.

They moved to Sexton in 1929 and during that time, they contributed much to the community. .

Joseph and Nancy retired to 20 Musgrave Road Gympie and farmed at Wilson Pocket before selling the property and moving to Tin Can Bay. This is where they settled, living on Whiting Street.

Some recall Joseph as Strawberry Pop, in which he got this nickname because he used to grow strawberries in his backyard in Tin Can Bay.