Home  »  News   »   A big thank you to everyone from the Droughtrunners 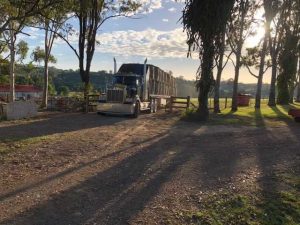 A load of hay that RB Droughtrunners sent to south of Mitchell last month. A BIG thank you to Howard Stokes for carting at a very reasonable rate to support those in drought

Late in July I did another supply run through to Longreach with about three tons of food and vouchers for farming families.

A big thank you to those that have continued to donate to the IGA’s with collection trolleys, Drakes in Gympie, Ed’s Bakery, The Snak Shack, Barnacles, Lee’s Fishery, Tin Can Bay Bakery, Wayne (TCB) for his can donations, anonymous donors at Bank of Queensland Gympie and Gympie South Lions for a big donation.

Also thank you to Rainbow/Cooloola Wholesalers for loading the pallets.Thank you all.

Just briefly, country from Augathella to north of Blackall has good grass cover but dry. Barcaldine area to Longreach seems to be only herbage and very bad. Morven to Mitchell to Roma is not good and there won’t be many crops harvested if any. The only good thing I saw was the number of full dams.

Late this month I am heading through north western NSW and dropping off some hampers for the Drought Angels.

Hopefully this drought will end this year and not outdo the ten-year drought around 1900 when temps reached 50 degrees out west and people dropped like flies before heading to the coast  (that was global warming) with no air-con.