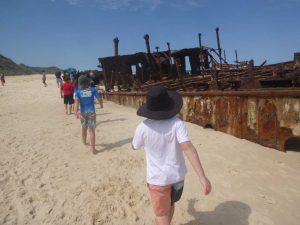 Kids view the majestic wreck of the Maheno

So what rates from a child’s point of view visiting Fraser Island, now known as K’gari?

Guy thought the inland track was the best, Max liked feeling the vibration and Brodie said he was “anti-gravity man” and felt like he was launched “five metres into the air”!

Everyone agreed that John from Fraser Explorer did a wonderful job.

“All the calm sounds of nature” – we couldn’t have said it better ourselves, Jack. Kids said the location was Wanguba where the water was “serene and clear”, and appropriately named Whispering Creek.

Jacob learnt the history of logging, Mason was intrigued with the old machines in the shed and everyone loved hearing about the thunderbox!

“Freaking out foreign tourists with a classful,” Mr Mileson said the group descended on the hugely popular Eli Creek.

Max liked floating down and blew up his rashie “like a Michelin man”, said Mr Mileson – they agreed some green slime was a low point! 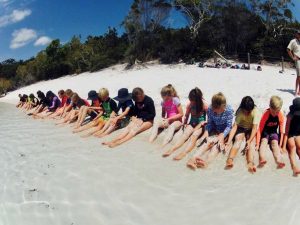 On the shore of Lake MacKenzie

Ella thought the best fun at the iconic lake was not the beautiful turquoise water, or the white sand  that tourists flock to, but splashing her teacher! Pete admits, “I did feel like I was in my own washing machine!”

Jackson liked how the group ran into the water together, “In a big line we were jumping into the lake, it was just crystal clear with my goggles.”

Tia smiled and remembered how they, “Rolled around in the sand and breadcrumbed.”

Mr Mileson said, “How often I have gone over to the island and seen wildlife in the first half hour.”

By far, the highlight WAS amazing. Alex was still excited, “I actually saw a dingo eating a shark!”

Cody said it was like a baby bull shark, and the dingo started nipping on the fins. Mr Mileson chipped in, “everyone likes chomping down on some flake”!

The kids said they saw the very same dingo, and said it was still hungry – looking at fish!

Jacob said it was cool to see to dingoes trotting along in front of buses, but they also spotted a sea snake, eel and then found spider holes at Central Station.

The Funlantans recited the history to me – Luxie said that it was “used for all kinds of things, medical boat, cruise ship-luxury liner and hospital ship”.

It was being transported to Japan for scrap metal when it broke the toe line and was washed ashore.

The vessel had a further purpose during the war – Jack said it took a direct hit with bombing – “you can see where the boat split”.

The three laws of Fraser
What is good for the land comes first.
Do not touch or take what does not belong to you.
If you have plenty you must share.

Mason agreed, “like it was split in half by a knife”.

They liked the mystery of how it was buried in the sand, “yellow sand from the rust and iron”, Max described.

This year, marvellous Mr Mileson is off on other adventures – taking time away from teaching. We wish you well, Pete, and I personally thank you for your more than a decade of teaching at RBSS, with such insight and humour, each one of my children (often for two years) – Editor.