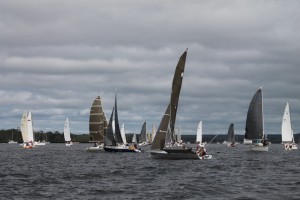 The skies cleared for a fantastic start to the 35th Bay to Bay yacht race. The race started at the Tin Can Bay Inlet, south of Inskip Point and sailed up the Great Sandy Strait, and day one finished in the vicinity of Fig Tree Creek, where they spent a quiet Saturday night at Garry’s Anchorage.

The winds were not strong enough to provide a full course, but they were sufficient strength and consistency to provide a fair mixed fleet racing, and all boats were able to finish the shortened courses both on Saturday and Sunday.

Day two they were up for an early start finding a suitable place to begin the leg home to Hervey Bay where they finished at Mark F between Big Woody and Little Woody Islands, with all boats returning safely to harbour.

I would like to say a special thanks to Tin Can Bay Coastguard Skipper Terry McLeod, and Competent Crew Daryl Williams for allowing me to photograph the race from Mount Rescue.