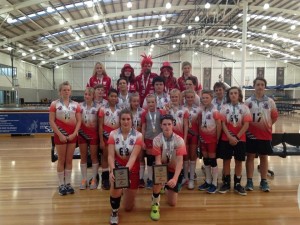 Our representatives at the Australian Volleyball Schools Cup 2014

Twenty-five Tin Can Bay representatives travelled to Melbourne on the December 7, 2014 to contest the Australian Volleyball Schools Cup. Coach, Dave Arthur, had primed them up with the motto, “work equals success.”

And they took this on board.

Two teams from Tin Can Bay under-14 girls and under-15 boys confronted teams from New Zealand and each of the Australian states. The girls went through pool matches undefeated and made the semi-finals against Burnside from the Sunshine Coast.

It was a closely contested match, with Kyani Parton serving the deciding point and Drew Holt (who was the spirit recipient for the tournament) finishing the point with a strong block. The win put Tin Can Bay in the championship match against Victorian champion school, Monbulk.

The valiant Tin Can Bay girls came from behind against a solid attack, but went on to win 3-0 in straight sets.

As to the under-15 boys. They lost just one match before their decisive semi-final win against South Australian team, Unley.

The gold medal match against Victorian school, Mazenod College, was a rematch of an earlier situation in which Tin Can Bay had won. The game started badly for Tin Can Bay as they went down 20-25.

Captain Zeke Varley created a spectacular jump serving performance, providing an 11-point buffer for his team. This knock set up an easy win in the second set, 25-12 for Tin Can Bay. The deciding set see-sawed between the teams but Tin Can Bay finally defeated the Victorians, and won 2-1.

Congratulations to the following Tin Can Bay Taipan Athletes: