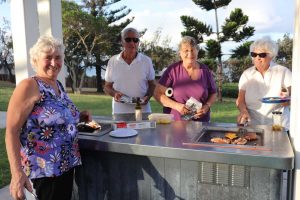 Cooloola Coast Probus Club Members are looking forward to the Annual General Meeting on Monday, March 11, at the Sandcastle Motel, followed by the Changeover Lunch on Monday, March 25 at the Tin Can Bay Country Club.

At the same time, Club Members will celebrate the 10th Anniversary of the Club being formed, chartered on February 19, 2009, when 23 members were inducted – John Olson being elected inaugural president and a current member.

Last month fifteen C.C. Club members attended the annual Ecumenical Service at the Wesleyan Church in Gympie. Wide Bay Probians representing two Gympie Clubs, two Maryborough Clubs and one club from Hervey Bay witnessed a most enjoyable service, which included a special blessing of the Collars of Office of all Club Presidents at the Service.

A delicious morning tea was served with time to mingle and chat with fellow Probians. One of the great things about Probus is that members have the opportunity to meet and make new friends of fellow Probians at various functions held during the year. Members then adjourned to the Phoenix Hotel for lunch and the General Meeting.

With the motto “Fun, Friendship and Fellowship”, new members/visitors are welcome to meetings and activities. Meetings are held on the second Monday of the month at the Sandcastle Motel, T.C.B. For further enquiries – phone Jo Said 0428 762 572 or Kaye Olson 0421 648 129.